As much as some Tea Party Leaders like to talk about their principled, steadfast positions on immigration, they seem to turn a blind eye to real criminality when it suits them.

Take the case of Idaho Republican Raul Labrador, who is fighting to win the leadership position left vacant by Eric “Steakhouse” Cantor, largely with the frenzied support of Tea Party ideologue, Mark Kibbe, author of Give Us Liberty: A Tea Party Manifesto.

Raul Labrador was an immigration lawyer in Idaho for years but when you look at his record, Kibbe’s hero doesn’t seem be quite in line with Tea Party Principles.

A Washington Post article portrays Labrador as a weepy Tea Party longshot for the GOP Majority Leader’s position; someone supported by FreedomWorks, lumped in with Rep. Justin Amash and maybe just maybe (Raul coyly won’t say) urged to run by the likes of Ted Cruz.

This is the far-right Tea Party crowd with an unyielding, uncompromising position on tossing every immigrant man, woman and child back over the border. These are law and order people.

Have the people pushing Raul actually looked into his record as an immigration attorney?

I have and let me tell you — it’s astounding.

Raul handled case after case with clients who had serious criminal convictions. There’s a reason that some attorneys take those cases and it has nothing to do with patriotism or law and order. It’s not about the red, white and blue… these are cases you take strictly for the green.

Did Matt Kibbe from Freedomworks ever talk to Raul about his client Carlos Araiza, who was busted for drugs and distribution and then failed to show up in court? Freedom didn’t seem to work for Carlos.

Did Raul ever tell Sen. Ted Cruz how proud he was to represent Javier Sotelo, a human smuggler who had a murder charge in Mexico?

Would the Tea Party get furious fast if they knew Raul represented Abel German-German, a Mexican national unlawfully present in the United States who had an illegal gun? Or would they give him a pass for having a name that sounds doubly German?

Raul Labrador’s Big List of Troubling Clients goes on and on. It’s not a couple of bad apples; it’s a business model of taking the clients that reputable immigration attorneys don’t want to touch. The lawyers who take those clients rack up a lot of losses and usually are the first to plea out their clients, but that’s no surprise.

Here’s a political reality check: if Raul Labrador was a Democratic Congressman, Conservatives would be all over this story. They’d scream to high heaven about what a low life Labrador is.

So, why is Raul Labrador getting a free pass?

FreedomWorks, like many Koch funded PACs, is more adept at dictating what Tea Party Conservatives should do rather than providing them with the information they demand and deserve to make their own informed and intelligent decisions.

In whipping up the frenzied support of Raul Labrador, FreedomWorks has done a remarkably effective job at getting Tea Party Conservatives to wholeheartedly back a pro-amnesty immigration lawyer.

Whether that’s a testament to Freedom Works and ideologues like Mark Kibbe dictating the actions of Tea Party Conservatives or a case of the Conservative Leadership providing sophisticated political cover for Raul Labrador remains to be seen. 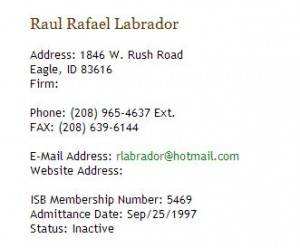 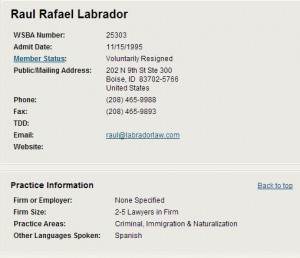 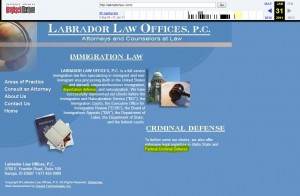 Cases in Which Raul Labrador Sought Amnesty for Criminal Foreigners