In America, the President is Not King & Immigration Officers are Not Judges

Expedited Removal is a highly abridged process by which individuals who attempt to enter the U.S. without proper documents are summarily deported without the opportunity to present evidence (except what is on his or her person), call an attorney, or speak in front a judge.  In these cases, a lone Immigration Officer serves as Judge, Jury and Deporter in Chief.

As onerous as the current Expedited Removal provisions are, the new Administration has and will continue to conflate an Immigration Officer’s duty to enforce the law with a Judge’s duty to render considered decisions in what is now the most complex area of American jurisprudence.

“It is one thing to keep someone out of our country who has no legal right to be here. It is another thing entirely to summarily expel people who live in the United States but who can’t convince an ICE officer that they have been here for 2 years or more.  Drastic expansions of “expedited removal” will inevitably lead to more erroneous deportations of people who actually do have a legal and moral right to remain here. And it will dangerously interfere with the ability of people to seek protection from persecution and torture in their home countries.”

Immigration, Border Patrol, and Customs Officers are law enforcement agents, not lawyers, and most certainly not Judges.

Judges are highly experienced and specially trained lawyers charged with rendering legally sound and prudently considered decisions based on a dispassionate analysis of the facts and the sound application of those facts to the constantly evolving, often conflicting, surfeit of immigration laws, regulations, and policies.

To give law enforcement officers the power to enforce the law and also render judicial decisions as to the legality of their own enforcement actions is not only illogical, it is illegal overreach and sets dangerous precedent.

There is no adult in the United States who is not guilty of a crime for which they were never arrested.

Have you ever spit on the sidewalk? Urinated on the side of a building? Tried marijuana? Have you ever been pulled over by a cop? Did the police officer give you a ticket, decide you were guilty based on the evidence on your person, deny your right to legal counsel or to obtain further evidence (like proof of insurance) and conclude the traffic stop with an imposition of punishment upon you?  It’s a preposterous scenario that defies common sense and flies in the face of the hallmark of our Democracy: the Separation of Powers Doctrine.

But, in fact, this is what Trump has done.  He has made untrained, insufficiently educated, non lawyers Judge, Jury and Executioner.  A sole Immigration Officer is now charged with and obliged under Trump’s Executive Orders to render judicial determinations regarding the legality of their own enforcement actions.  This is what is known in common parlance as a self-licking lollipop.

But why, you ask, should I care? I’m an American Citizen.

Immigration Officers have a pattern and practice of mistakenly or maliciously deporting thousands of U.S. Citizens from the very start of the behemoth Department of Homeland Security. Here are a few recent or current cases in which Americans were wrongfully detained and/or deported.

A Black teen who speaks no Spanish deported to Colombia 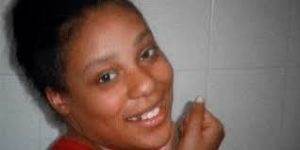 A U.S. Military Veteran who was illegally held in immigration prison for 6 months 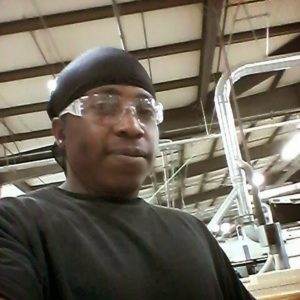 Andres Robles who was 19 years old when Immigration and Customs Enforcement (ICE) agents in Louisiana ignored his claims of U.S. citizenship, as well as their own files that confirmed his status as a U.S. Citizen.  Andres was deported to Mexico for three years.

Robert Dominguez, a native born American who is facing deportation for the second time despite copious evidence of his birth in the United States. Robert is forced to defend himself against false allegations that he grew up in the Dominican Republic. Here is a photo of Robert as a baby with Kmart in the background.  Did you know there are no Kmarts in the Dominican Republic? How many Government Lawyers does it take to deport an American Citizen?  In Robert’s case, no less than 6 federal lawyers are working zealously to deport him. 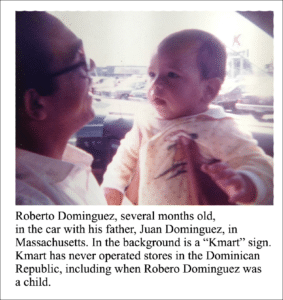 Professor Jacqueline Stevens has analyzed hundreds of thousands of official records documenting the ongoing deportation of U.S. Citizens, many of which were obtained only after Civil Rights Lawyer Andrew Free‘s successful FOIA lawsuits. Without the work of Professor Stevens and Andrew Free, the public would never have known how many Americans are deported by the Department of Homeland Security each year because “ICE does not track the number of U.S. citizens it detains.”

The appalling revelations gleaned from Professor Stevens’ analyses confirm that DHS has, and continues to, detain and deport American Citizens. 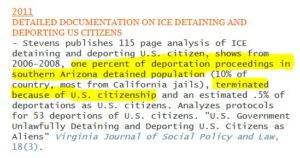 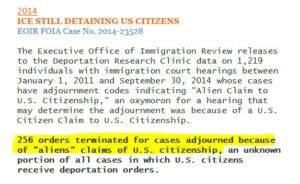 And yet, the Department of Homeland Security has the audacity to continue to maintain it “never detains U.S. Citizens” let alone deports them.

The danger of exponentially broadening the net to catch aliens by stripping the twin pillars of  Due Process and Separation of Powers is that the net becomes so large as to ensnare American Citizens as well as aliens.

Upon finally returning home after numerous deployments to Iraq and Afghanistan, Air Force Pilot Rick Rynearson was repeatedly stopped by Immigration Officers. Once he was detained for over half an hour when, after answering 17 questions from agents, he refused to answer any more.  The Border Patrol agents would say, “Come on, Rick, this is hardly a threat to your liberty. Just tell us where you’re going.”

Rynearson is a loyal American who proudly served his country only to return to a home where he was repeatedly stopped in the middle of the road after having done nothing wrong and finding himself surrounded by armed government agents with dogs–  a most sorrowful return to the “Home of the Free” this U.S. Veteran pledged life and limb to defend.

As an Air Force pilot, Rynearson understands that protecting our safety and freedom sometimes requires a police presence or military action. But he offers this reminder: “Real freedom lies in the thin space that separates an American citizen from an armed member of their government.”

We have veered far afield from the principles upon which this Nation was Founded.

In America, the President is not King and Law Enforcement Officers are not Judge, Jury and Executioner.