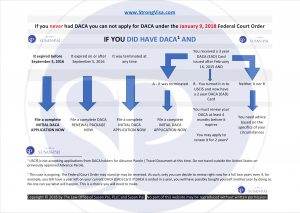 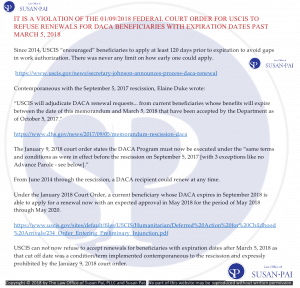 The current state of Deferred Action for Childhood Removals

Client had DACA and it expired before September 5, 2016 – File Initial Application

Client had DACA and it expired on or after September 5, 2016 – File Renewal Application

Client had a three DACA granted post Judge Hanen Order on or after February 16, 2015 AND turned the three year DACA in to USCIS for a two year DACA – Can Renew or Apply Now

Client had a three DACA granted post Judge Hanen Order on or after February 16, 2015 but NEVER turned the three year DACA in to USCIS – May be able to Renew or Apply. It depends upon the client’s situation. Proceed to due diligence.

Accurint, TLO: Individuals entitled to a copy of their own commercial background check

DACA is a Stay of Removal

It’s not a permanent solution

No Travel Authorizations in Conjunction with DACA

No March 5, 2018 Deadline on Filing on either Initial or Renewal Applications

If client has a year left on DACA, an Application may be submitted

Applicant was physically present in the United States on June 15, 2012

Applicant is currently enrolled in a High School Program

Applicant has not been convicted of a felony, significant misdemeanor, three or more other misdemeanors, and does not pose a threat to national security or public safety

Applicant is currently in removal proceedings

If any additional information is needed, please contact me directly. Otherwise, we respectfully request that the Service defer action upon beneficiary and approve the enclosed I-765, Application for Employment Authorization.

Your hard work and consideration is most appreciated.