Douglas Rivlin responded directly to my article re Obama NOT being able to stop all deportations.

No, I did not go after Luis Gutierrez even after his bizarro speech about Obama enforcing Immigration Laws (which, quite frankly, I thought was just silly as it was a response to the disingenuous Republican proposition that they can’t pass Immigration Reform because they can’t trust Obama to enforce it).  But, I did go after National Council of La Raza for declaring the President is the Deporter in Chief without saying a word about Speaker Boehner and the Republicans’ BS obstruction of CIR under the fake as* Hastert Rule.  NCLR’s declaration of President Obama as the “Deporter in Chief,” Doug’s response, along with Gutierrez’ speech and similar “concerted messaging” leads me to believe the “Obama is Deporter in Chief” is now a Coalition Move– a wrongheaded one, at that.

The euphamistically named “Congressional Bed Mandate” requiring the detention of a minimum of 34,000 immigrants each and every day makes ANY act of discretion by the President just that– an act of discretion.  No expansion of DACA, PIP, or other exercise of discretion IS ANYWHERE CLOSE TO ANY KIND OF REAL FIX to our pathetic, embarrassing and utterly broken immigration system where US veterans and pregnant women are deported and 7 year old children represent themselves in court.

Because of the Congressional Bed Mandate, any exercise protecting any class of detainees/deportees merely pushes the air in the balloon.  The balloon is full of 34,000 Immigrants who must be in custody every night at a cost to taxpayers of $5 million a day. The 2013-2014 mandatory jailing of 34,000 immigrants a night was introduced by House Republicans last summer 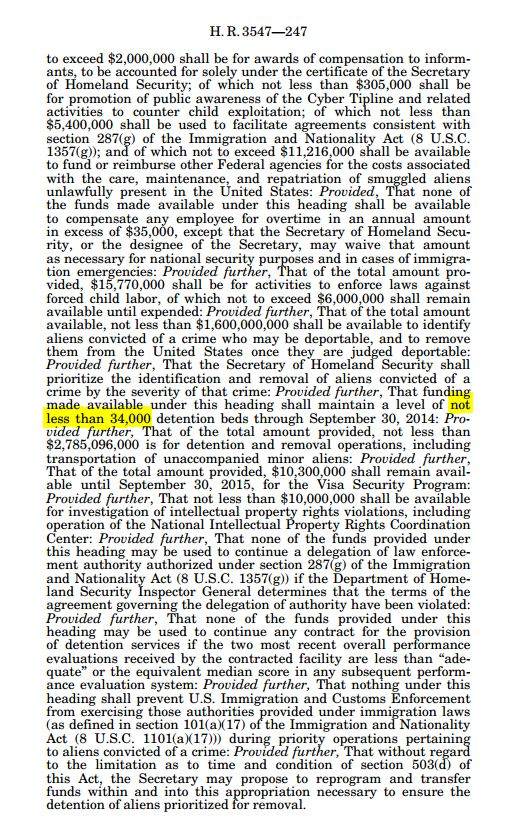 THE SENATE, HOUSE, DEMOCRATS & REPUBLICANS ARE RESPONSIBLE FOR INCLUDING THE CONTINUATION OF THE CONGRESSIONAL BED MANDATE WHICH CLEARLY DRIVES DEPORTATIONS. 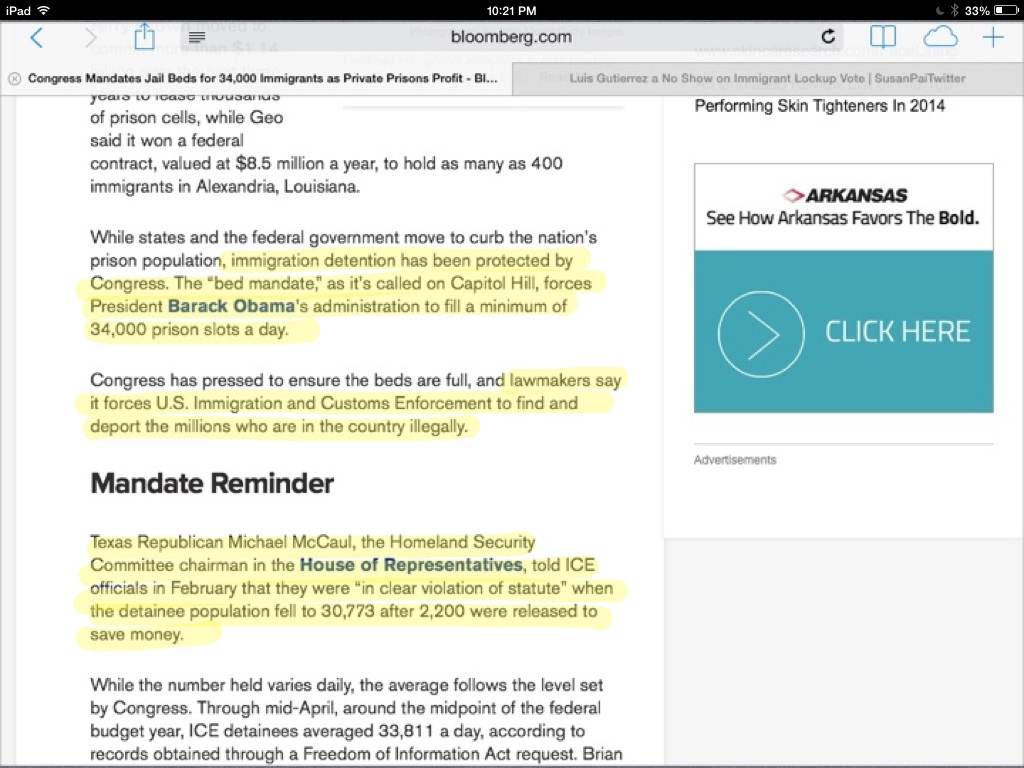 Nevertheless, here is a record of EXACTLY who voted for continuation of the mandatory minimum of jailed immigrants and who voted AGAINST it.  Not being present for a vote as important as this should also tell you about the absentee.  The votes are mostly down party lines but not a few Democrats voted for the continuation of DHS appropriations, including the Congressional Bed Mandate, along with most Republicans.  Here you can see exactly who voted for the House introduced bill both in the House and the Senate.

DHS isn’t a hotel; if they don’t fill those beds every night, they answer to House Republicans who will and have accused DHS of breaking the law when too few immigrants are jailed. It’s the mandatory detention balloon. The ignorant don’t understand the analogy of executive discretion just being a pushing around of air in the balloon. So, you save this one million over here and that one million over there becomes more of a target for arrest, detention & deportation.

By the way – Luis Gutierrez – shame on you for saying President Obama has spent more on deportations than any other president before him. No, actually it was YOU, the House, that presented and passed the DHS appropriations bill. DHS, as far as my searches from 2002 on the ICE website, has NEVER requested a mandatory spend to jail a minimum number of immmigrants every night. THAT is something a HOUSE DEMOCRAT conceived of following high migratory patterns from Mexico during the economic boom and REPUBLICANS have been defending ever since… even as net migration to/from Mexico has fallen to zero. Additionally, in this last Appropriations Bill, the House proposed to fund the mandatory detention of immigrants at an amount HIGHER than what was requested by DHS. 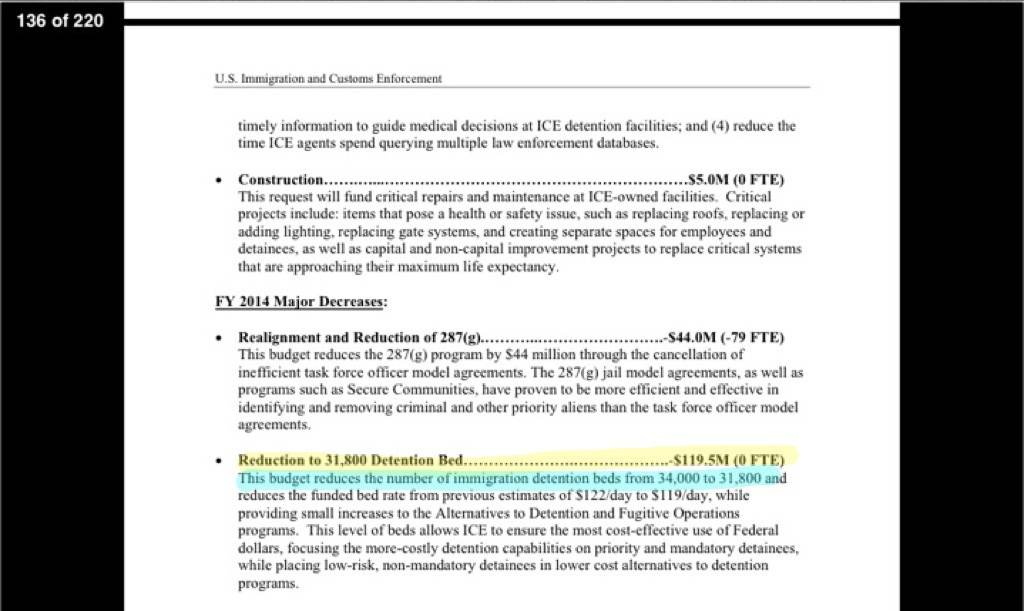 The fact that this town square stoning of President Obama, who has exercised UNPRECEDENTED discretion in stopping the deportation of over one million Dreamers, appears to be a Coalition Move is distressing in its utter wrongheadedness.   What is so hard to understand?  No, Obama isn’t CHOOSING TO DEPORT RECORD NUMBERS OF PEOPLE, CONGRESS MANDATED IT!!!

If you, Ladies and Gentleman of the House and Senate let the Congressional Bed Mandate slip under your noses because you didn’t READ THE BILL (as I’m learning is more the rule than the exception) then you need to get better “reader reporters” or you can put that Ivy League Degree to work and actually READ THE DAMN BILLS YOU VOTE ON!!!

So, Congress, you messed up.  You let the Congressional Bed Mandate pass because you weren’t paying attention or because of the private prison lobby $$$.  Whose fault is that??? CONGRESS MADE IT ILLEGAL FOR DHS NOT TO DETAIN 34,000 IMMIGRANTS A DAY!

The Senate has passed a bipartisan bill, the House refuses to vote on it or the House version of it, HR 15 and President Obama will sign either today.

One thing all these Deporter in Chief people have in common, including Gutierrez, is that they have been trying UNSUCCESSFULLY for 10 years funded by millions perhaps billions in grants and contributions to get the Dream Act passed and they can’t even do that… let alone get Comprehensive Immigration Reform.

Enough politicking.  Now is the time to put all our cards on the table.

We want a vote on Comprehensive Immigration Reform in the House (HR15).

If there is no vote, we want to see who will sign a discharge petition, even if the discharge does not garner enough signatures.

Anyone who won’t sign the discharge petition WILL NOT GET OUR VOTE– Republican or Democrat.

If you, Representative A, B & C, support Comprehensive Immigration Reform, then prove it by signing a discharge petition.  If you don’t, we will vote in someone who will.

Status Quo has not worked for the last 10 years so now, it’s time for a change all around if need be.