By Susan Pai on January 13, 2017 in Humanitarian, Immigration News, Legislation 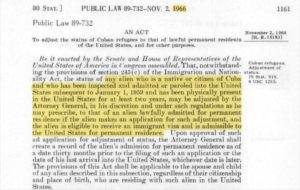 The Cuban Adjustment Act is now, half a decade after its passage, ubiquitously used not  to provide refuge and asylum from political oppression but as a mechanism by which Cuban Citizens may commute between their homes in Cuba to the U.S. for work. 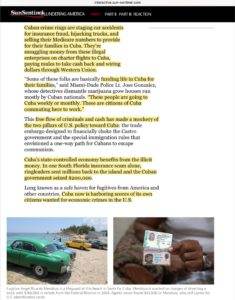 I am the child of a refugee who fled the Communist Regime of North Korea, leaving behind his entire family at age 15, never to see them again even up to his death 50 years later. I am acutely aware of a communist regime from which physical escape is the only way to evade inevitable torture and persecution.

Cuba has evolved since passage of the Cuban Adjustment Act half a century ago. To say 1962’s Cuba is the same as 2017’s Cuba is fallacious.

It is irrefutable that in addition to Cuban asylees who meet the legal definition asylee as applicable to every other foreign national in the world, there exists a significant number of Cuban asylees who vacation for long periods of time or reside part of the year in Cuba soon after being granted Lawful Permanent Resident status (Green Card) in the U.S.  These are not anecdotes.  The numbers of such Cuban asylees is statistically significant.

This fact, in and of itself, warrants an examination as to whether or not an irrebuttable legal presumption (that any individual who flees Cuba is an asylee) should inure to all Cubans by virtue of the fact that they are Cuban.

The overly broad application of an irrebuttable legal presumption, the implications of which are of life changing magnitude and significance, flies in the face of our notion of equal protection. Every other foreign national in the world must individually meet the burden of proving asylee status– including North Koreans and Syrians. Cubans are no longer or perhaps even, ever were, entitled to preferential treatment over every other asylum applicant in the world who is seeking otherwise unattainable refuge from persecution and torture.